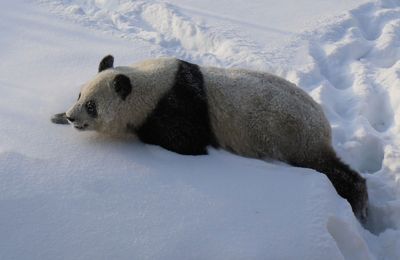 The Panda House in the Ähtäri Zoo opened up to the public on the 17th of February 2018. During the first week and a half there have been an average of five hundred daily visitors.

Jonna Pietilä, the CEO of Ähtäri Zoo, told Yle that the visitorship has been what the what the park expected. The targets were reached during the weeks when a large part of finns are spending winter holidays. Children are off from school and families usually take the same week off. During the peak days at the zoo in Ähtäri have reached 600.

In 2016 the Ähtäri Zoo had a total of 180,000 visitors which makes for an average of 500 visitors. The recently introduced pandas have been estimated to require an additional 100,000 visitors more to be profitable to the Zoo located in central Finland. The chairman of the board, Mikko Savola, has estimated that the facility would attract over 300,000 visitors with the new creatures on display.

So far most visits have been day visits and only a handful have spent the night in Ähtäri. The main season is still during the summer when the masses are on holiday and the weather is warm(er). The winter holiday weeks are the exception to the rule when a lot of visitors often visit the Zoo which also has a farm animal park. All in all the pandas make visiting the Ähtäri zoo a unique opportunity to see the animals in Nordics.

Tourism in Finland has been on the rise in the recent years. Like most zoos the Ähtäri attraction is mostly a family attraction, the location hopes to attract families with activities for children as well as a camping area for extended stays: Ähtäri Zoo Camping