Amazon recruiting in Finland, rumored to open an R&D center

The eCommerce and web services giant Amazon has announced plans of coming to Finland. This August the company held two recruitment events in Espoo and Tampere, both of which are sites where there are plenty of former Microsoft and Nokia employees.

The company remains tightlipped about it's plans and the contact person has been told not to comment o the media. There is speculation that the project is related to retail, eCommerce, cloud services, logistics and delivery. A data center is also a feasible possibility. 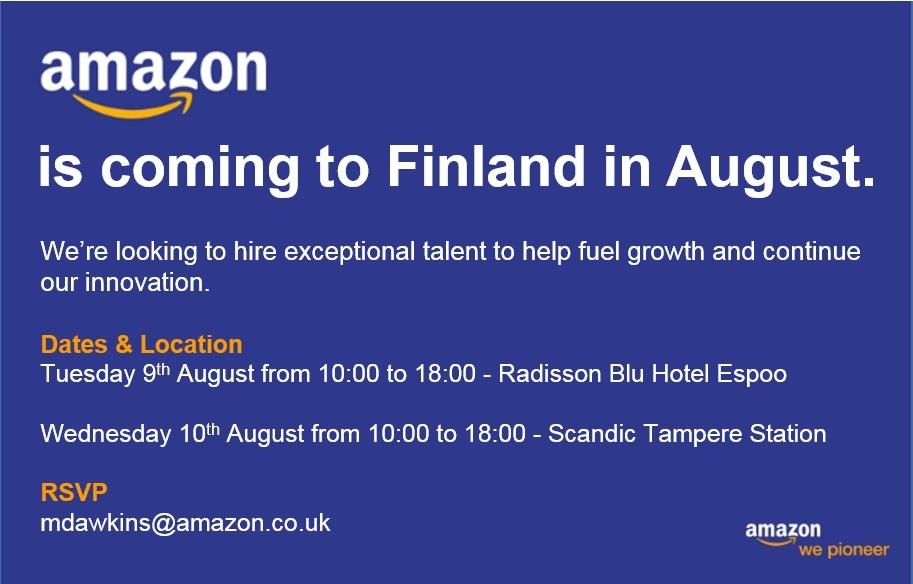 The LinkedIn message where the announcement was made mentions that Amazon is looking to strenghen it's Kindle team. Kindle is the Amazon's succesful product lines of eBooks that connects to the online bookstore the company also controls. The contact person, Mark Dawkings, is working for Amazon's Lab126, the company responsible for Kindle development.

Because the recruitment is aimed to Espoo and Tampere, it is likely that the company is seeking to find talent from the former workforce of Nokia and Microsoft. There is plenty of applicable knowhow for device development that is interesting for Amazon. The company lists open positions to include Software and Hardware Engineers, Architects, Technical Project Managers, Audio specialist, Camera specialists, Supply Chain, Sales & Marketing and Finance specialists.

There have been rumors that the jobs would not be limited to the German and Luxembourg operations Amazon currently has. There is discussion on opening a Research and Development unit in Finland. Previously companies such as Zalando and Unity have entered the country to tap into the talented local workforce.