The ASMO USB charger wastes no energy; turns off when not in use 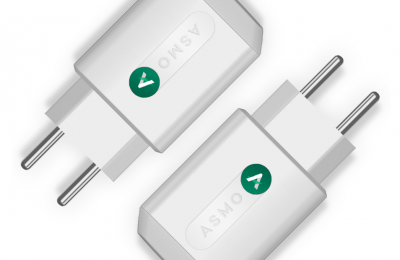 The Finnish startup Asmo Solutions is looking to revolutionize the world of such a mundane thing as a mobile phone charger. The company has developed one that switches of when it's not in use, they call it the ASMO Charger.

Many people do not realize that even when chargers of devices such as mobile phones, tablets and laptops are not in active use they still consume electricity. This is why you should plug them out after you're done charging.

Even if modern chargers only use a minuscule account of electric current when in standby, on a scale such as we have today globally it makes up a large amount. And most users leave their chargers plugged in day and night.

Asmo Solutions has developed and patented a mobile charger that completely switches of when a device is not connected. This allows users the convenience to keep their device charger plugged in with a clean conscience.

Do you unplug your mobile phone charger when you are not charging your device?

The company also touts improved fire safety as one benefit for the smart charger. To end users the device works just like any other charger and it's beefy enough to charge any device. The full specs being listed here:

After a successful crowd funding campaign, the company is now starting production of the chargers in Joensuu, Finland, and the Asmo Chargers are available for purchase online for the price of 39,95 € (+ shipping).

View the company's pitch in the video below: