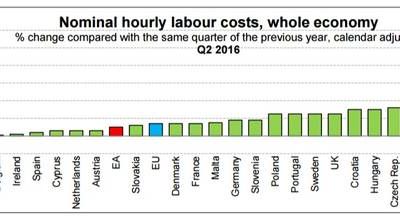 According to the latest statistics the cost of labour fell in Finland. According to the numbers from Eurostat, a pan-european organization, the results show that the cost fell the most in whole of the European Union.

The total cost of employing staff fell by 2,0 percent in the period from April to June in Finland. During the same period Germany recorded an increase of 1,8 percent and Sweden an increase of 2,5.

The comparison is strictly about the change of the change, not the absolute level of employment. So the results don't show that the cost of employment would be the lowest in europe, but the change towards lower cost is the fastest.

In addition to Finland, only Italy and Luxembourg managed to record a drop in costs in the statistics. Long term trends are not showing a continuous trend of such dramatic results for Finland.