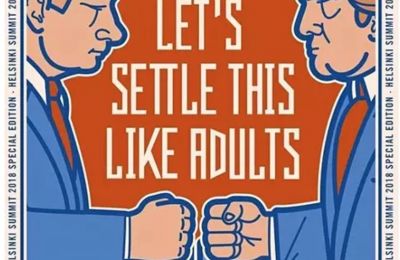 The heads of state of Russia and the United States of America will meet in Helsinki, the capital of Finland on July 16th. Finnish RPS Brewing is looking to cash in on the hype and is launching a beer just in time for the summit.

The beer, labelled "Let's Settle This Like Adults", is themed by the rock, paper and scissors game. This is a reference to the RPS Brewing company name, which comes from the game as well.

The presidential brew will be available in Helsinki before and during the time the two world leaders are in the city. Interviewed by Helsingin Sanomat, RPS Brewing CEO Samuli Huhtanen of states the company name comes from the fact that many decisions in the company have been made using the game.

Huhtanen sees that the two world leaders could also solve conflicts using the same technique. A fair game of rock, paper and scissors can be more fruitful than weeks of negotiations. The label is designed by Art Director Juho Ojala and says that it depics the starting position of the game, with the two presidents as players.

The beer will be sold for a limited time only and will be available at least at Löyly Helsinki. A total of 10,000 bottles of "Let's Settle This Like Adults" will be brewed.