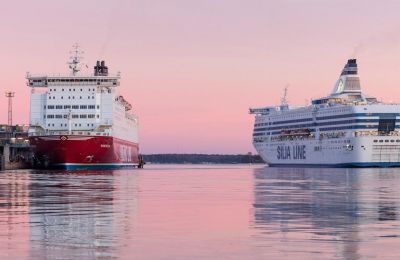 Helsinki rose to be the busiest passenger port in Europe, and possibly the whole world. With 12,3 passenger going through this nordic Capital City of Finland. Growth has been especially strong in the Tallinn scheduled traffic.

Helsinki and Tallinn are increasingly integrated as a "Twin City", where economic and social relationships are close. Route traffic to Stockholm in Sweden, St. Petersburg in Russia, and Travemünde in Germany has been stable for years. In recent years the international cruise ship landings have grown agressively.

In 2017 the total number of passengers going through the port of Helsinki grew by 2,4% compared to the previous year. Scheduled traffic in grew by 1,8% amounting to 11,8 Million passengers. 9 Million of these travelled to Tallinn, the capital city of Estonia. The routes to Stockholm carried some 2,3 Million passengers - a decrease of 0,1%. The total number of international Cruise Ship landings in 2017 was 266.

Shipping companies have added capacity to the Helsinki-Tallin route with larger and faster vessels. They have added seasonal capacity as well, and the Port of Helsinki has responded by adding a new Terminal space in November 2017. Interest in the Helsinki-Tallinn route is has been growing especially among Asian visitors.

The effects of the port to the Helsinki Metropolitan Area are significant. For travel services such as hotel, restaurant, transport and retail shopping are remarkable. Each year seafaring travellers bring in some 805 Million Euros. The combined turnover of all economic activities is estimated at 1,6 Billion Euros, and providing employment to some 15 000 employees.

« See the pandas in Finland zoo - How to get there and 2018 ticket prices - Alcohol free Salmiakkikossu liqueur with no Vodka, great Liquorice taste »