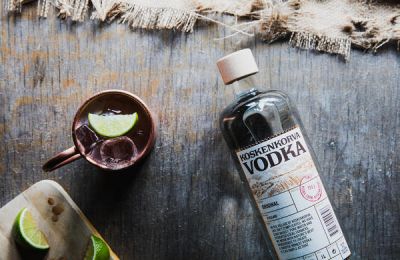 The highly automated factory employs some 50 people direcly. In addition it provides work for some 30 outsourced workers. A single production shift runs on three members of staff: One is on the control panel controlling the process and making required. Another is on the factory floor collecting samples and supervising dry materials. The third is controlling ethanol production.

After the year long trial ended in 2014 no employees wanted to return to regular eight hour shifts. The factory made a local agreement that can be terminated by the employer or the employees single sidedly. So far both parties have been happy with the agreements.

In the current arrangement 15 process controllers and two extras follow a schedule where working days are 12 hour long. The switchover point between for the shifts is always at six o'clock. Morning shifts at the Koskenkorva factory start at 6 AM and end at 6 PM.

After two shifts there is a 24 hour break for sleeping. This is followed by two night shifts spanning from 6 PM to 6 AM. After this there is 1 day for sleeping and 6 days off for a total of 6 consecutive days of leisure.

Altia has benefited from the change, which has allowed more effective use of the work force. It seems like a win win, as employees are tempted by the long breaks offered by the scheduling.

Experts belive that two 12 hour night shifts are easier for the body to recover from, than four 8 hour shifts. According Timo Mantere a six day break every ten days feels like holiday each time.

Other companies in Finland are also interested in adopting 12 hour shifts. However 12 hour shifts are not suitable for all kinds of work. During longer shifts the risk of accidents grows in physical work and productivity in cognitive tasks lowers.

« Coal use up by a fifth in Finland in March - Helsinki burned a third of it - Prices of new apartments drop by 6,7 percent in the greater Helsinki region »