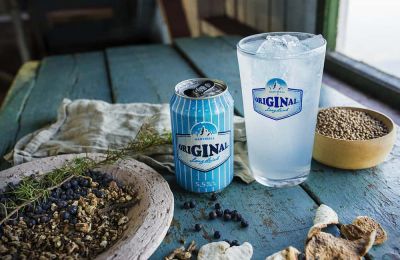 There was a change in the laws regarding sales of alcohol on January 1st 2018. As a result supermarkets and kiosks can sale products with up to 5,5% in alcohol. Previously punters would need to go to the state owned alcohol monopoly Alko or bring it from travels.

Another change is that was made that drinks made from mixing spirit and other materials is now available. Before all drinks sold in supermarkets needed to be created through a brewing process. For most drinks this was a non-issue, but did allow drinks like Bazardi Breezer and Smirnoff Ice to be sold in more places.

This change in production of the drink was especially significant for the national alcoholic soft drink Long Drik (AKA Lonkero). The drink was made available in the Helsinki Olympics in 1952 to allow large numbers of mixed alcoholic drinks to be made available at large quantities for the audience. The drink has remained popular ever since.

Original Long Drink is made from gin and grape juice

The Long Drink is a mix of gin and grape juice and is sold in bars alongside with beer and cider in the country. However, to make the drink available to grocery shoppers breweries started manufacturing a variant made by brewing. This is not as good to booze up as the taste is not as good as the one made from Gin and Juice. This lead to tons of the stuff being imported from ferries traveling between Turku and Stockholm and Helsinki and Tallinn.

Now that the "real thing" is available in grocery stores and other outlets, the statistics show that Long Drink imports from ferries have plummeted. According to the National Institute for Health and Welfare statistics the total imports of alcohol from abroad dropped already in during 2017 when the law change was not in effect.

Early statistics indicate that imports of Long Drink cans by travellers has fallen by 28,6 percent. This is an expected phenomenon as the alcohol monopoly Alko lost 40% of sales in the first months after mixed alcohol Long Drinks became available under the new law. In 2017 the Hartwall Original Long Drink was the most sold single product in Alko, which sold a total of 3,3 Million liters.