Man steals bass guitar from library, uses it to trash a car 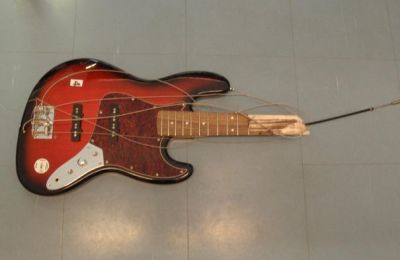 A finnish man took a guitar from the library in Helsinki. An hour later the police received a report from some 50 kilometers away in Nurmijärvi. The man was bashing a store window and a car with the guitar.

A police patrol apprehended the suspected 32 year old man near the damaged vehicle. The man was in posession of a broken bass guitar and a small amount of drugs. After transfer to the Hyvinkää police station the police contacted the library that the bass guitar was in their posession.

Police sent an image of the musical instrument to the library staff and it was confirmed that it was the one taken earlier the same day from the library. The instrument is beyond repair, but will not be discarded. Instead it will be placed on the library wall for all people to see.

The motive behind the crimes are unknown, but the library has made an official report of commtted crime. The library, with a musical room and instruments available for practise use within the facibility, has a spare bass guitar.

Last year the library Kirjasto 10 has a total of 580 000 customers, but according to the staff stealing the instruments is very rare. This was only the third incident in the history of the establishment.