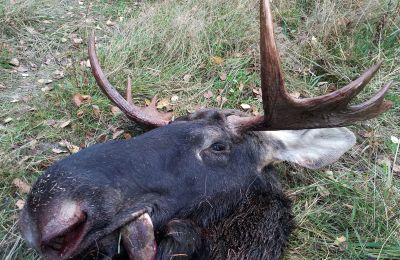 A moose caused a wildfire in Joensuu. The beast hit low hanging powerlines at the border of the Koli national park, this caused issues with electricity and also sparked the fire.

Staff sent to repair the electricity supply issues in the nearby buildings noticed the wildfire. Firechief Seppo Hortanainen from the North-Karelian rescue services tells that the authorities received word of the fire from the electricians.

Rescue personnel from the Eno service station soon arrived to extinguish the fire. In total some four hectares of fields and forest was burned due to the fire. The crew had to monitor the area for some time after the fire was done, since the ground is currently very dry.

The Joensuu moose wasn't in such a good mood. The partially burnt beast had died at the scene and the rescue services crew left it in place for nature to dispose of. It might very well end up as snack for a cannibal camel or for someone getting into competitive eating.

« 18 room mansion in Hollola goes on auction, starting price one euro - Valmet Automotive revenue up 77%, records a loss due to "production hell" »