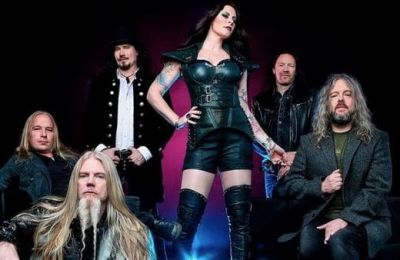 Nightwish is a Finnish music group that is well known internationally. The bands symphonic metal has captured the hearts and minds of metalheads around the world since it's inception in 1996.

The worldwide popularity started from humble beginnings when Tuomas Holopainen scored a record deal with his three song demo tape in Kitee. To celebrate their journey the band is putting out a collection album with the essential tracks from the iconic metal band. The collection is known as "Decades".

The band has seen it's share of drama with changing female vocalists, but has stood the test of time and continues to be popular on tour as well as recorded music. The line up has changed over the years (or should we say Decades), but male singers Holopainen and Marco Hietala have been in the line up from the beginning.

In a third teaser trailer Holopainen states that they never aimed to re-record the tracks, as he believes the originals best represent the state of the band at the times of release - with the original female singers Tarja Turunen, Anette Olzon and Floor Jansen. All of the material is remastered to improve quality even more and is said to offer new dimensions into the familiar songs.

The record is released on March 9th 2018 in several formats - including a special three CD box set. Recordings are available for preorder from the Official Nightwish shop as well as the Nuclear Blast online store. "Decades" themed t-shirts are also on sale on the official shop.

Teaser trailers give insight for fans on "Decades"

To provide a taste of what is coming and a little bit of a teaser the band has released trailer videos where Tuomas Holopainen provides interesting tidbits. All three videos can be found below. With the release date of March 9th 2018 closing in it's likely that the third trailer is the last one to be released on the Nuclear Blast YouTube channel

Nightwish "Decades" collection album to be released on March 9th 2018