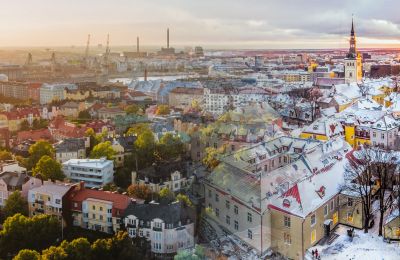 Talks of a tunnel connecting the cities of Helsinki and Tallinn is something that continues to be a topic of discussion. The planned 100 kilometer undersea tunnel connecting the two capitals would be unsustainable as a business. Government officials say the boost to both economies would make up for operating losses.

The railroad tunnel would span from the Tallinn Ülemiste airport on the Viims peninsula to the Helsinki-Vantaa Airport in Finland. The tunnel would travel a majority of it's course under the Gulf of Finland at a depth of some 160 meters.

There would be a total of three tunnels, with two for traffic and one for maintenance. In Finland travelers could get onboard the train at the airport, Pasila and the central railway station in Helsinki. Plans also include two articificial island off the coast of the cities.

The cost estimate for the 100km tunnel is some 13-20 Billion euros. The two cities have ordered a pre study, FinEst Link to evaluate the feasibility of the venture. According to the report the positive effects to both countries' gross domestic product would cover the building cost in some years.

Travel time between the cities would be 30 minutes if the trains could move at the proposed 200 km/h. This would enable more flexible options for working force moving between the two and would stabilise land prices in both cities.

Currently 9 million passengers make their way between Tallinn and Helsinki by ferry, but this is expected to grow to 14 million by 2015. With the tunnel the number is estimated at 23 million, of which 12,5 would use the train and 10,5 with ferries.

In addition to passenger travel the railroad would be used for cargo. In 2017 some 3,8 Million tons of goods were transported between Helsinki and Tallinn. This is expected to double by 2050, even without the construction of the tunnel.

Currently the venture is not on the Ten-T priority list for transportation projects in the European Union. As of now there are no detailed plans of if, and when, the construction of the tunnel would begin.