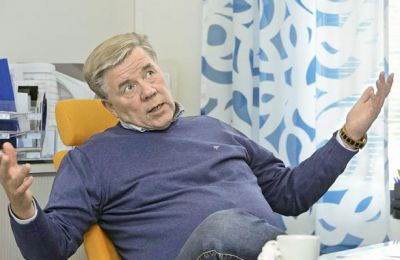 Finnish business man Markku Ritaluoma aimed to build a car sales and services complex near the city of Hämeenlinna. The project was initiated in 2010, but since that time the company behind the Sunny Car Center used dodgy business practices before finally going bankrupt in 2015. On March 1st the case goes on trial.

The original visions of Sunny Car Center included statements like largest car retailing cluster in Europe. The venture ended up yielding nothing but an advertising billboard and millions of debt. For the case under trial are Markku Ritaluoma and Iisakki Kiemunki, a long time member of the board of Sunny Car Center.

The core of the appeal states that Ritaluoma has transferred company funds offshore where creditors could not access them. Kiemunki has not been active in the hustle, but has been negligent and passive in the board and thus enabling Ritaluoma to move the funds. The total amount of funds missing are 6,2 Million euros plus interest.

Both defendants deny the charges against them. Ritaluoma states that during his funding of the venture he has been in contact with a large amount of people around Europe, the names include people like Abdal Rahaman Malik, Philippe Darian, Alexander Zulemaro, Maan Waheed Abdul Al-Sanea, Lola Nsimba.

In addition there is the case of Mark Wilson, who supposedly represented Regina Chiluba - the widow of the former president of the African country of Zambia. This has widely been accepted to be a Nigerian Scam Letter type of fraud that Ritaluoma fell for. According to Ritaluoma he large paid sums of money to a number of people who would in return invest the tens of millions of euros needed to build Sunny Car Center.

In a swiss hotel Ritaluoma gave a million euros to Philippe Darian, who gave a briefcase full of case of money in return. This was supposed to be an investment of 7-8 Million euros, but it was soon discovered that the cash was counterfeit. This case is still being investigated by the police in Switzerland.

Even after this Ritaluoma continued to proceed with shady deals. Six months after the hoax pulled by Darian, Mr. Alexander Zulemaro received a payment of 87,000 euros in return for for an investment of 20 million euros. Zulemaro presented a Barclays Bank document that the funds were held by the bank. Unfortunately this document was forged and there was no 20 million.

In addition Jorma Tuomaala, the pubic administrator running the SCC case against Ritaluoma and Kiemunki says there are non-existent companies receiving payments from the company. Companies like Joy-T ventures and Rosey Cooperative Services are not found in the international company registry.

Other companies connected to Sunny Car Center are Sheraton Textiles, Enjreni Trading, Lamak Ltd were operating in completely unrelated industries such as textiles, spices like pepper and cardamomma as well as seafood. Tuomaala says money has been sent to these companies with the expectation of an investment to Sunny Car Center in Hämeenlinna in return.

This case is the first of a total of five writ of summons related to Sunny Car Center. In terms of money it is allso the largest. The other cases there are claims for unpaid sponsorship fees at ice hockey arena skyboxes and other debts to companies in Finland.