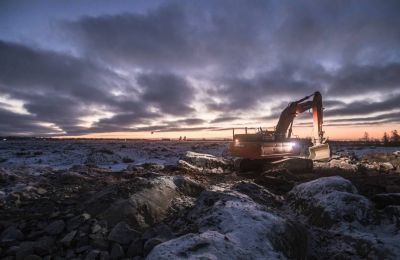 Fennovoima, a Finnish consortium of power and industrial companies, is in the process of constructing a new nuclear power plant to Pyhäjoki in Finland. Rosatom - the company contracted to build the plant has not been able to confirm the construction schedule for the new reactor.

Fennovoima has been formed in 2007 and does not currently operate any power plants, nuclear or of other types. The planning of a 1200 Megawatt facility to Pyhäjoki is progressing. According to news from the Oulu based newspaper Kaleva, Rosatom has still not confirmed the schedule for the construction project.

Chairman of the board for Fennovoima, Esa Härmälä, states that the board expects the overall schedule of the construction of Hanhikivi 1 nuclear facility would need to be ready soon. Härmälä makes a reference to the fact that a trains that leaves late usually also arrives later than expected.

Catching up during such a large scale enveavor could lead to compromises, something unacceptable for any significant project - let alone one that involves nuclear technology. The director is willing to accept some acceleration, as long as they do not compromise security. The location of the proposed plant is in Pyhäjoki, halfway between the cities of Kokkola and Oulu in northern Finland coast.

Fennovoima has move it's target of getting the construction permit to 2019, because Rosatom has not been able to deliver the required design and planning documents according to the schedule agreed with the Radiation and Nuclear Safety Authority of Finland.

There is no drama in the delay according to Härmälä, and he expects there will be no delays similar to the ones at the ongoing Olkiluoto 3 project in Eura has faced. The OL3 reactor was planned to be in production by 2009, but now completion is said to 2019.

Once complete the Olkiluoto 3 will be the most powerful Nuclear plant in the world, providing a whopping 1600 Megawatts to power the Finnish industry and homes.