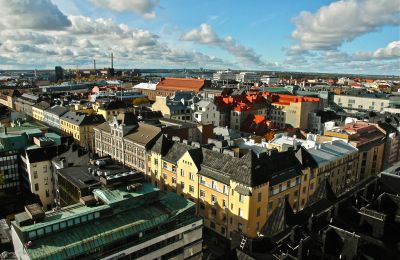 In the Nordic housing markets two countries are facing decreasing prices. In Norway and Sweden prices have fallen in the latter half of 2017. In Finland the prices have still been on a rise - will this change in 2018 or 2019?

The largest housing company in Norway, Obos has reported prices that average prices for apartments in the country fell by some 3,9% in December - Year over year the decrease has been 11,8%. According to the company their apartment stock is now priced at an average of 5700 Euros per square meter in the capital Oslo area.

Meanwhile in Sweden the prices have of apartments have dropped 8% over the past three months. These statistics come from Valueguard, a statictics provider for real estate prices. The drop was most significant in the capital Stockholm area where prices dropped by 9,5% in the three month period.

For both Norway and Sweden the economies are still going strong, and the brokers are confident that the fall will not continue for long. For Norway Daniel Kjørberg Siraj from Obos expects the prices to turn to stabilise in the summer and return to growth in the fall. In Sweden the government budget surplus is at record levels due to hefty tax income and the economy continues to boom.

For the Finnish markets local brokers are not worried about a crash in housing prices in Finland. Denmark, Norway and Sweden have had a more dramatic growth curve - the Finnish market has been much more stable. This is largely due to the long recession period following the Financial Crisis in 2008.

Demand has outstripped supply in Sweden as construction has been limited - this has inflated prices excessively. In addition the western neighbours have had much lax policies on mortgages. Even if Finnish citizens are more in debt than ever before, this is still at a significantly lower level as in Sweden and Norway.

Swedish authorities are addressing these problems. They are imposing stricter schedules for mortgage pay back. In addition the tax reductions of load interests is talked to be removed. In addition the government aims that a total of 700 000 new apartments be built in the country by the year 2025.

The Finnish real estate market has avoided over heating. There are a number of reasons. Some actions the Swedes are planning -like the tax cuts for mortgage interests is already being done in Finland. Construction activity has been at records highs, keeping supply and demand in balance.

Prices in helsinki rose a mere in Helsinki 2,5% in 2017. This is low to the double digits Stockholm enjoyed in it's haydays. Currently the consensus among economists and dealers in the country that the bubbles in housing prices in neighboring Scandinavian countries are not a risk that will destabilize local markets in Finland.