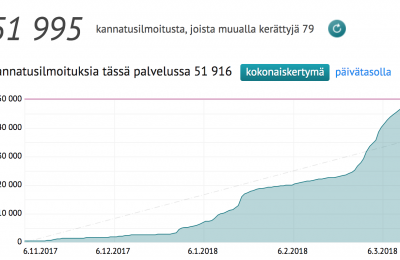 Over 50,000 people's initiative to remove inheritance and gift taxes. The initiative to change the tax legislations is still available for signing on the Kansalaisaloite site. The Finnish parliament will process initiatives that receive over 50,000 signatures within the first six months of it being published.

On Monday 19th of March 2018 11:38, a total of 51,995 had shown support for the initiative. The Kansalaisaloite.fi service is maintained by the Ministry of Justica and anyone can make a public initiative to the system.

The initiative to drop the inheritance taxes was made in early November 2017 by Christian Pundars. In the first months there were few signatures made to the Vaasa resident's initiative. The amount of support for the initiative has accelerated in the last few weeks, finally breaking the limit of 50,000 in late March 2018.

The reasoning for the tax law change is that many choose to transfer assets abroad to avoid paying the local taxes. It is also seen as unfair that already taxed income is taxed for the second time when passed forward as inheritance or gift. Other nordic countries have already revoked the tax, Sweden in 2004 and Norway in 2014.

The tax also complicates citizens' life in cases of deaths and divorces, with the state punishing the next of kin with inheritance tax. The watershed number of signatures has been made, but people can still show their support to the initiative: Kansalaisaloite: Perintö- ja lahjaverosta luopuminen