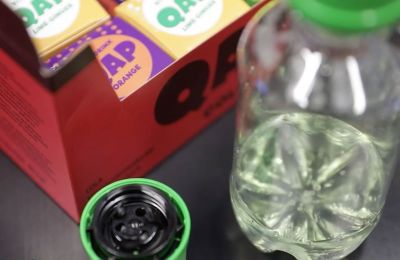 EasySoda designs and manufactures bottle caps that turns water into soft drinks. Now the company is rebranding it's products to QAP and extends offerings to alcoholic drinks.

Currently the company is designing and producing the new products outside of Finland, because they lack the required permits to produce alcoholic drinks. Initially QAP will produce six different flavors of the product; Gin & Tonic, Mojito, Aperol, Sangria, Long Drink and Caipirinha. Each drink will be 5,5% when mixed with the correct amount of water.

Three years ago Finnish inventor Kaj Pelamo developed a bottle cap that turns tap water into soft drinks like Cola. The cap works by releasing flavor and carbon dioxide into the bottle with a simple and easy to use machanism. See how the invention works in the video below:

The new alcoholic drinks work on the same exact principle. The alcoholic beverage producing cap is slightly larger than the soft drink equivalent. In addition to flavoring and carbon dioxide it contains 64% alcohol. To create a drink 2,2 dl of water is mixed to produce a ready-to-drink beverage. Perfect for instant boozing up wherever clean water is available.

The company plans to sell it's goods to Asia and Europe. The first likely market is Denmark, because they can be sold in stores there. The company is trying to get the products on sale in Finland via the alcohol monopoly Alko, but does not expect the market to be significant.

The company has received plenty of investors, with five Finnish and two foreigners joining the group as owners in 2017. The company is planning to expand globally and hopes to produce a million caps each month during 2018. Production capacity limits expansion, and this is why QAP is also considering licensing production to selected partners around the world.

« Finland will not extend initial basic income experiment beyond 2018 - Sci-fi movie Iron Sky 2 delayed once more, but still set for release in 2018 »