Company opens its district heating network to anyone with excess heat 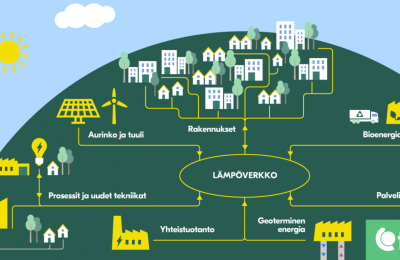 Fortum is the first Finnish company to provide access to it's district heating network to any at public purchase prices.

In a press release Fortum district heading director Mikael Lemström states that the Open District Heating networks allows anyone with excess heat to sell it to Fortum. Taking advantage of head left over from industrial processes or individual properties allows more effective use of energy.

Fortum says it has worked together with selected partners since 2014, by purchasing heat left over from hospitals and data centres and feeding it to their grid. Now the company is expanding the program, making it's network open to anyone. The company states cooperation is key to fighting climate change.

Fortum has district heating networks in Espoo, Kauniainen, Kirkkonummi, Joensuu and the region of Keski-Uusimaa. Currently around 20% of all energy distributed through the Espoo network is excess heat from other tools. The target is to increase this to over 30%, which will be as much as the total heating energy used by the city of Joensuu.

The company's networks in other regions use significantly less excess heat, nevertheless the company is aiming to be carbon neutral in all it's district heating services. Taking advantage of heat from industrial facilities has long been a staple in the industry, but novel cases like using Data Centers are as a source of heat are coming more commonplace.