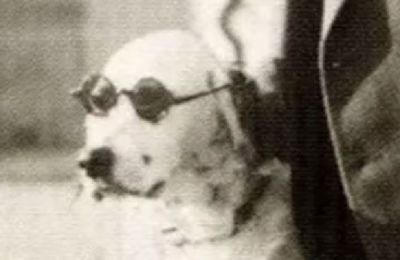 A dog owned by a Finnish business man infuriated the Nazi officials during World War two. Documents show that months before Germany attacked the Soviet Union in 1941 the Nazis were spending time investigating a dog imitating the Führer.

The mutt, partly Dalmatian, was owned by the Finnish business man Tor Borg. At some point the dog, Jackie, was trained to raise a single paw whenever the word Hitler was said. The information comes from German foreign ministry documents unearthed by historian Klaus Hillenbrand.

During his research Hillenbrand found around 30 documents that was published in the Die Tageszeitung newspaper in 2011. The article states that the Tampere based business man Tor Borg and his wife's dog Jackie caught the attention of the Nazi regime.

Josefine was known to be against the Nazis. The dog and it's training was noted by German official Willy Erkelenz, and in January 1941 he sent a message to Berlin that in Finland there is a dog that makes Nazi salutes each time that someone yells "Hitler".

The Germans planned to put the owner out of business

Tor Borg was called in for questioning to the German embassy in Helsinki, where he denied calling the dog Hitler. He did admit that his wife had done so a few times, but said that they never meant to dishonour germany. The diplomats did not believe him and reported home.

The action against Mr and Mrs Borg was planned in cooperation with the German Chanceller, Finance and Foreign ministries. The plan was to stop sales of medicine to Mr. Borgs company Tampereen Rohdos Oy, to make it go bankrupt. In the end the actions fell through because of the lack of evidence and witnesses willing to testify against Mr Borg.

Fast forward to today and a man who uploaded a video to YouTube of a pet dog giving Nazi salutes has been convicted of committing a hate crime in the UK. See the video below.