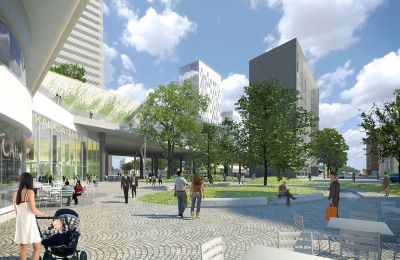 The panelists projected three threats for the finnish housing market (and market prices):

The Finnish Renter's association representative Mia Koro-Kanerva warned about investing in regressing finnish cities like Joensuu, Kouvola and Kotka. She does remind that even in these cities an investment can be worth while - but more risky than in more lively cities like Vaasa, Jyväskylä and Lahti.

All the panelists agreed that the Finnish population should diversify their assets more from real estate. According to the Stock Market' Associations CEO Sari Lounasmeri the Stock Market has been a better investment in the last one hundred years. Mika Pantzar from the Business School of Helsinki reminded that the past is no guarantee for the future.

Communication entrepreneur Jouko Marttila warned about investing in secluded location - using an example from Pori where a house that cost EUR 400 000 to build remains unsold at a selling price of EUR 200 000. It was estimated that over a Million domiciles in Finland are located in undesirable location. Combined with a historically low interest this could be a time bomb when rates move towards the long term mean values.

In addition Marttila noted that investing in the Helsinki Metropolitan area is also a risky venture on the 15-20 year span. This assumption was based on the current stock of over 30 000 unsold apartments. As the aging Finnish population deceases there is a growing number of apartments available on the market. Combined with large scale layouts like the ones from Microsoft in Espoo, it might be that there simply is not enough purchasing power left in the market to sustain current price levels.

When purchasing an apartment one should already consider who will be the next owner. Situations change and an unsold apartment is a capital investment that might be hard - or even impossible - to liquidate. Same applies to Commercial Buildings - experts agreed that with rising eCommerce the oversupply of retail space is inevitable.

The last major housing price crash in Finnish housing prices took place in the early 1990's depression. In the late 1980s prices per square meter in Helsinki rivalled that of Monaco. This does not seem sustainable - and indeed was not. In January 2014 Helsinki Times painted a dark picture of the Nordic Property Bubble.

« Länsiväylä: Microsoft may oust over a thousand employees in Espoo - Bestiality In Finland - it is legal to have sex with your pet »