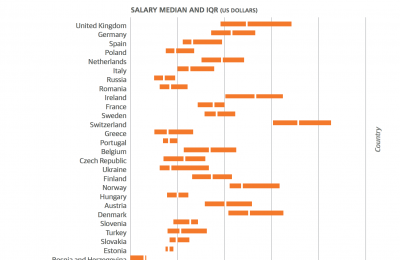 Our of the European countries the highes salaries are in Switzerland, the United Kingdom, Ireland, Denmark and Norway. With banking and finance providing higher wage yields in general, Switzerland is a class of it's own - and the only country on the continent that could match salaries of the US and Japan.

The British isles and select Nordic countries are in the second tier. Finland belongs to the third salary tier of the countries. Together with Austria, Belgium, France, Sweden, developers in Finland fall behind around -$22,000 USD in annual income when adjusted with the coefficient. A vast majority of developers worked for 40 hours, with higher hours resulting in a significant relative increase in income.

Salaries in general remain uneven throughout Europe. Notably some countries experience large fluctuations within different regions. The largest impact to wages comes from the country and business you work in, where as the language you program in has a smaller effect on income. Curiously the age of developers seems to have little correlation to their income.

Despite salaries not being on the lowest level in Finland in Europe or the, the country can remain competitive in the global market. Many companies like Ixonos and Reaktor, for example are seeing success in providing services to high-value markets like the United States and the United Kingdom. In these countries the language barrier is low, but the time difference can cause some trouble in co-operation.