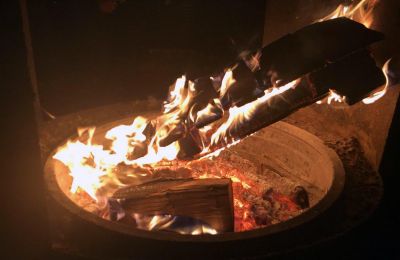 A fourth of the warming of the arctic area comes from black soot emissions. Finland is the highest emitter of this form of pollution, with the majority of it coming from fireplaces and sauna stoves. Emissions of dangerous particles to health are highest when burning wet wood.

Wood burning in Finland is a significant source of small particles. In the greater Helsinki region up to 40 percent of emissions come from burning wood during the coldest winter months. The emissions of black soot melts snow and ice as far as the polar ice cap.

Black soot emissions are a significant factor in rising temperatures. Finland has campaigned internationally to reduce emissions of black soot by reducing flaring of gas in oil fields in the arctic areas. However the country has homework to do as the small scale wood burning produced more of the stuff than transportation.

In 2015 wood burning caused 65% of the emissions, where cars and trucks were accountable of 18%. Black soot is the third largest contributor to global warming after carbondioxide and methane. It is not as potent as a greenhouse gases, but has a high impact in the arctic areas.

It is estimated that a fourth of arctic warming is caused by black soot which absorbs sunlight and warms up the atmosphere. Once it lands it reduces the share of solar energy reflected back to space from the surface of the earth. Warming of the atmosphere has accelerated since the turn of the millenium and the arctic area has heated at twice the rate of other areas.

Particles are not only an environmental issue, but affect public health as well. Globally the burning of wood causes millions of deaths every year, and it is estimated that some 250 people die of small particles in Finland each year. Exposure to particle emissions cause asthma and heart troubles.

Small scale wood burning is not regulated currently, but significant changes are coming in the form of a new emission limits set by the European Union. By year 2022 new fireplaces must confirm to emissions. The new limitations will not cover existing fireplaces or new sauna stoves.

A clean burning process will cause less emission. This can be detected easily from the colour of the wood. Fire coming from the chimney will turn white very fast when the wood is dry and there is plenty of air available. Dark, soot rich smoke is emitted when wood is damp or there is not enough air for the wood to burn efficiently.