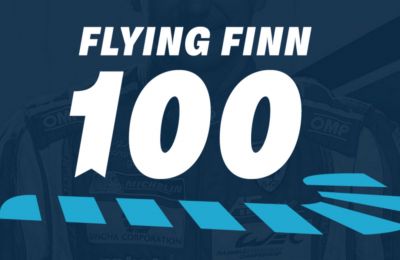 Flying Finn 100 is a new campaign by the finnish motorsports association that aims to find new talent in Finland. The campaign aims to collect enough funds to purchase a total of 100 junior kart racing karts by 2017. The campaign is supported by Kimi Räikkönen, Heikki Kovalainen and other notable Finnish figures in motorsports.

The campaign aims to make sure that even young talent with limited financial means have the opportunity to practise motorsports. Along the years Finnish racing drivers have accomplished great things in Formula 1, Rallying and elsewhere.

In the last years the trend has been downwards, with a dry spell of new successful talent. Finland continues to have a strong motorsports heritage with the classic "Thousand Lakes Rally" arranged since 1951, MotoGP motocycle grandprix planned for 2017 and possibly even a Formula 1 Grand Prix in Helsinki.

AKK Motorsports Association has started the Flyin Finn 100 that aims to improve the situation. With the campaign the association wants to ensure that future Finnish driving talent will have the chance to success regardless of their background.

The campaign's celebrity supporters Toni Vilander, Kimi Räikkönen, Heikki Kovalainen, Esapekka Lappi, Simo Puhakka and Topi Heikkinen have all enjoyed success in the world of motorsports and owe it all to karting. They started with the sport and now want in part to make sure the success of Finns in motorsports continues.

F1 superstar Kimi Räikkönen has already did some individual donations by providing cars to Bemböle and Lappeenranta karting circuits, but companies are now also encouraged to join to the effort. For a sum of 3000 euros you can get a car with your own livery, states Tatu Lehmuskallio, CEO of AKK Motorsports.

Lehmuskallio is a newcomer to motorsports and he joined the marketing company of the Finnish motorsports body earlier this year. He already had an idea on where he wants to direct the efforts of the 30 000 members of the motorsports union.

"I want to see that motorsports has a strong position in Finland. The sport must be accessible to all talented individuals. Karting is not a cheap hobby and we need to find new ways to enable youngsters with limited financial means to show the world what they're made of."

The campaign is the first of it's kind in Finland, but with the reasonable sum of 3000 Euros companies can get visibility. The aim is to collect a total of 3 million euros in donations to purchase a total of 100 new karting cars. The target deadline is 2017, the hundreth anniversary of the Finnish independence.

« Think tank study: Finns content with their life, aware of need for reform - Microsoft to axe an additional 2850 jobs as it seals smartphone exit »