Industrial output decreased by 9.7 per cent year-on-year in April 2013 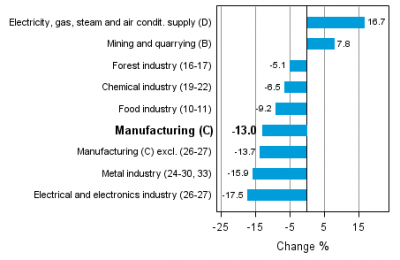 According to Statistics Finland, output of total industries adjusted for working days was 9.7 per cent lower in April 2013 than twelve months earlier. In the January to April period, industrial output adjusted for working days went down by 5.1 per cent from twelve months back. The industrial output figures in March and April were affected by Easter, which occurred in different months in 2012 and 2013. Original output of total industries went down by 3.3 per cent from one year back in April.