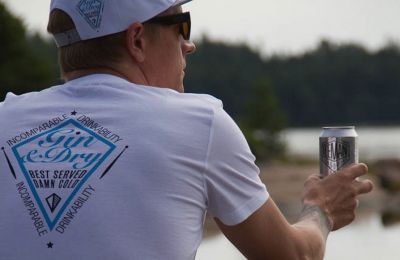 At the end of August the cruise and ferry ship operator Tallink announced that it has acquired the rights to sell an alcoholic drink with the Iceman brand. The Finnish racing driver Kimi Räikkönen has now appeared in official media material for the Iceman Long Drink, a mild alcohol drink.

The Finn has a long history with partying, dabbling with alcohol and promoting niche brands such as Makia and Sheriffi bubble gum. As the veteran driver's career in the Formula 1 series draws to an end, he continues using his name and the Iceman moniker for tongue-in-cheek brands such as the Iceman Long Drink.

Finland has a history with celebrity branded alcoholic drinks such as athlete Matti Nykänen and musician Linda Lampenius/Brava having had mild cider drinks sold in their name.

The beverage is now available onboard Tallink and Silja Line ferries. See the social media outlets of the brand for more for more information:

See some memorable videos which have made Kimi Räikkönen a legend on track - and off.

Makia Racing - How we got Kimi Räikkönen

Kimi Räikkönen was having a shit when Pele made a speech

Leave Me Alone I Know What I'm Doing