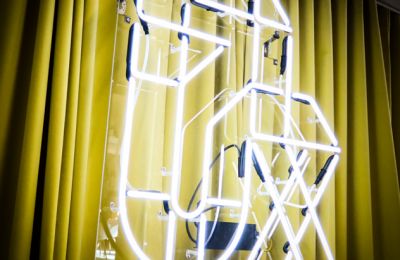 If you're in downtown Helsinki and looking for a place to work, there's a new option for you. Microsoft has opened a co-working space in Korkeavuorenkatu. The creative space offers a cafeteria area, a 3d-printer and various rooms. The space is known as Flux.

The co-working space opened it's doors on Thursday 21st 2016 and Microsoft hopes to attract all types of creative folk to the working area. The idea is to bring together different types of people who might not otherwise meet. The Seattle based company has previously had a similar concept office in San Francisco, California.

Flux has a quirky feel to it with a smart mirror that shows the weather, an event calendar and more information on what's going on in the shared space. In addition there are retro and clicheé elements like a 1980's pinball machine and a foosball table. The bathroom is fitted with an old TV that blasts out Microsoft commercials from the past decades.

There are already a number of companies using Flux as their homebase, but there is still plenty of room for digital nomads or other workers like freelancers that feel they would like more interaction with other start-up minded people.

A customer relationship or using Microsoft products like Windows is not a requirement, but the company hopes that Flux will expose it's technologies to a broader range of people. This is done by access to technology as well as coaching.

In the past start-ups and Microsoft could have been considered as clashing cultures, but Flux is one initiative that hopes to change this. There are a number of similar projects in the Helsinki area, such as Mothership of Work and an initiative from the city of Helsinki to convert the Maria hospital to a start-up space.

Microsoft Flux is located in Korkeavuorenkatu 35, Helsinki and it's open weekdays from 09:00 to 20:00. More information on the Microsoft Flux Facebook, MSFTFlux Twitter and Microsoftflux.com.

« Pulled Oats is a vegetarian alternative to Pulled Pork from Finland - The worlds largest sauna heats up in Espoo, Finland »