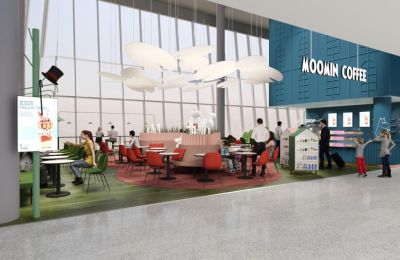 The new extension at the Helsinki-Vantaa will host three new restaurants when the first section opens up the public in early 2019. The Moomin Coffee cafeteria will be accompanied by two new restaurants; Jamie's Deli and Ajisen Ramen.

The Helsinki-Vantaa Airport has been breaking visitor records. The administration continues to invest in services to the expected 20 Million annual passengers expected to pass through the coming years. All three restaurants arriving to the airport in 2019 are well reknown international brands.

There are currently eight "Mumin Kaffe" Moomin themed coffee shops in Finland and Sweden: Helsinki, Stockholm, Oulu and Rovaniemi. The Helsinki-Vantaa Moomin Coffee is the first of it's kind in an airport.

Helsinki-Vantaa has the most direct flights from Europe to Japan, with Finnair an Japan Airlines flying to multiple cities in the land of the rising sun.