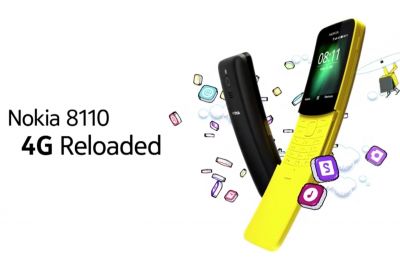 At Mobile World Congress in Barcelona HMD Global announced the return of the Nokia 8810 phone. The remake of the 1996 iconic phone updates the device to today.

Remembered by many as the "Matrix Phone", from the 1999 sci-fi classic Matrix - where Keanu Reeves played Neo, the chosen one in a dystopic future. Instead of the premium phone the 8000-series was in 1990's, the new phone is an affordable feature phone.

The device is a feature phone with services from Google and other popular internet staples such as Twitter. This device underlines fun and utility. With a lengthy battery life the Nokia 8110 is an ideal phone for weekends and being reachable, but not constantly connected. The 4G phone can be used as a mobile hotspot for tablets and laptop computers as well.

The 2018 remake of the banana shaped 8110 is available in black and yellow color variations. The device is priced at 79€ and will be available from May 2018. It's target market is the 1.3 Billion people in the world for whom an investment in phones is a significant one.