An Owl photobombs a Traffic Camera 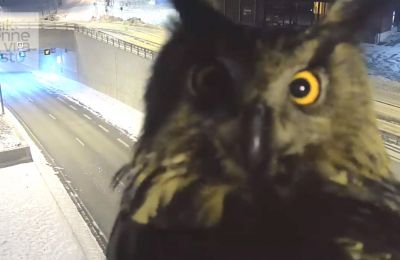 A few weeks ago two traffic traffic duty officers in Tampere, Finland were surprised. One of the cameras caught unusual motion. They decided to move the camera remotely and saw that it was an owl.

The owl was watching at it's own picture. The camera has a protective shell and a strong lens cover, from which it probably saw it's own image. After the camera operators turned the camera the eyes of the nightcrawler widened.

The two employees on duty, Marko Kolattu ja Jori Hildén, were afraid that this would spook the bird away. But it didn't as there's a total of three minutes of the bird of prey watching traffic and striking a pose every once in a while. You can see a cut of the video below:

The night duty operators often see small birds and crows, but an owl like this is a rare sight. On an average night there are plenty of foxes and rabbits around. There are quite a bit of animals on the move during the nights in the city.

The actual reason for the cameras is storing suspicious driving, some of which lead to further actions. Apparently during nights there are random human sightings in the highway. This is unfortunate, but so far no accidents have taken place in the stretch of road under surveillance.