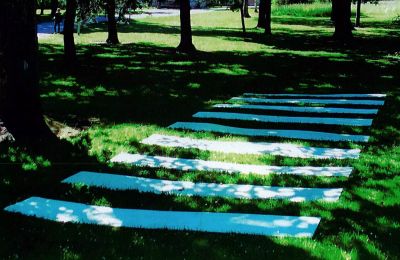 The city of Helsinki is planning to pay compensation to the artist whose piece was accidentally trashed in the summer of 2017. The city had made a rental agreement for an art exhibition in the park, but the work of art was mistaken for trash and discarded to the dumpster.

The exhibition was set to start on the 7th of July, but one of the artists had installed his piece five days early on the 2nd. The art modern art piece was imitating a pedestrian zebra crossing, and it was similar in size and materials as the real thing.

The organizer of the exhibition had contacted the gardener about the installations to be done, including the zebra crossing. Apparently information was never passed to the park workers who proceeded with removal of the piece, displayed in the image on top, on Monday 3rd of July.

The cleanup crew determined the item to be efforts vandalism and proceeded with removing and destroying the zebra crossing imitation. According to the team there was no sign or explanation that the item was a piece of art, and it was impossible to understand it as a piece of art.

The artist is now seeking compensation of 2,000€, but as of now the city is willing to pay a total of a thousand euros. Half it is for the materials and the other half for the labour put into the art. The city argues the total demand is not feasible as the exhibition organizer had not informed the city the exact date that the piece would be installed int the park.