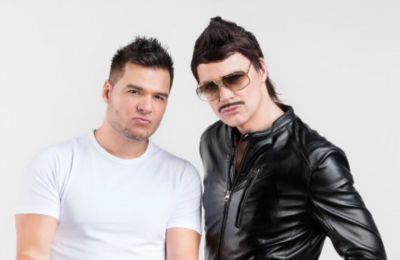 The Swedish Eurodance artist is in the run to represend Finland in the 2017 song contest. The artist known for his mighty mullet and hit songs in the first half of the 2000's is working together with another artist.

Günther is entering the contest as a in a duo with the Porvoo-based artist Daniel Sanz with a song known as Love Yourself. It's worth noting that Günther is no stranger to partnering with other artists as he has made many successful collaborations.

One of the most known of the collaborations of Gunther is is Touch Me, recorded with the 80's bombshell Samantha Fox in 2004. His new collaborator, Daniel Sanz AKA D'Sanz, also has prior experience of being in the lime light - this spring he got to the final stages of the Voice of Finland competition.

The dynamic duo aims to rock the stage and win to bring the competition to Finland again in 2018. This would be the second time the competition is held in Finland as Lordi took the Eurovision win in 2006. This year's competition will be held in Ukraine in May of 2017.

Before even guessing how Günther (real name Mats Söderlund) and his creative partner will do in the grand finale, they will need to make it through the qualifying where the artist for Finland is chosen out of ten competitors. The qualifying ends in an event that is held in Espoo on 28th of January 2017.

Listen to the song from Günther and D'Sanz: "Love Yourself":

« Finnish alcohol monopoly Alko to deploy booze trucks - The ASMO USB charger wastes no energy; turns off when not in use »