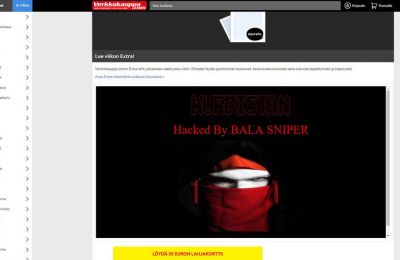 Finnish tabloid Iltalehti reports that the popular online store Verkkokauppa.com was hacked in the weekend. When following the the Extra publication link, an unexpected banner was shown. It had an image of a shrouded face and the following text: Kurdistan. Hacked by BALA SNIPER.

In addition the page had flashing gifs and it was showing an email address where the administrator should be in contact if they wish to gain access to the site. Iltalehti contacted Verkkokauppa.com 24/7 support line on Sunday evening. According to the first call there was nothing out of the ordinary.

The reporters continued to see the banner repeatedly and contacted Verkkokauppa.com for the second time. This time it was confirmed that there were inappropriate materials on the site and that an investigation will be done.