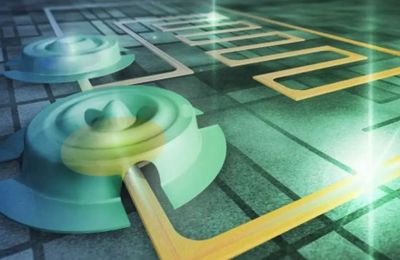 Quantum entanglement is a phenomenon where systems cannot be described independently, even though they are located far away from each other. The theory comes from Albert Einstein in 1935, and since that it's been widely believed that it cannot occur in anything beyond atomic or molecular level.

Now a research group from Aalto university has proven otherwise. The team lead by professor Mika Sillanpää has proved otherwise. They have been able to manage the most delicate properties of objects at almost human scale. In their lab experiments the researchers managed to get two particles almost visible to the human eye to enter a quantum state.

In this state both objects are in connection through Quantum Entanglement. Measurements were done at a temperature close to −273,15 °C to minimise noise. Next the team plans to attempt teleporting the mechanical quantum states. In theory quantum teleportation could become a reality by employing the Quantum Entanglement effect over a large distance, essentially reproducing the object in another location.

While transporting large objects as visioned in Startrek is a far fetched at this point, the teleportation could revolutionize computing. The extremely sensitive elements could be used as routers or probes, and advance core research in quantum mechanics. In addition to the team from Aalto university, the team had members from the New South Wales university in Australia, University of Chicago in the United States as well as the University of Jyväskylä in Finland.

The study was published in the Nature journal and it is available online: Stabilized entanglement of massive mechanical oscillators