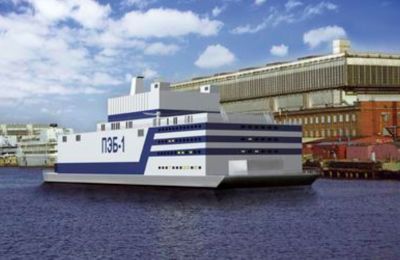 Russian energy company Rosatom is transporting the only floating nuclear power plant through the Gulf of Finland towards Murmansk and Siberia. The floating power house was built on the St. Peterburg Baltiski zavodin shipyard.

The nuclear powerstation, Akademik Lomonosov, is headed to Pevek located in the Northeast Tsukota prefecture in Russia's Siberia. The first leg of the vessel is Murmansk, where it will be loaded with nuclear fuel. The plant is expected to be started for the first time in late 2018.

The reactor of the Akademik Lomonosov is built on the experience gained from building nuclear powered ice breaker engines. According to the constructors it has excellent security systems that make it one of the most reliable nuclear power plants in the world.

Work on the placement location in Pevek is already complete, with the dock, hydraulics and other peripheral devices having completed testing and being ready for use. Fueling in Murmansk is expected to be complete in summer of 2019 and then it will be towed to Pevel.

In Pevek the Akademik Lomonosov will replace the aging Bilibino nuclear plant and the Chaunks coal plant. It is expected to reduce carbondioxide emissions in the arctic region by some 50,000 tons per year. When in operation the 144 meter wide and 30 wide structure it will be the northernmost nuclear plant in the world.

The Akademik Lomonosov can create up to 70 MW of electricity with two KL-40 naval propulsion generators. Rosatom is in the process of creating second generation floating nuclear power units, which will be equipped with two RITM-200M nuclear reactors, both delivering 50 MW of power.