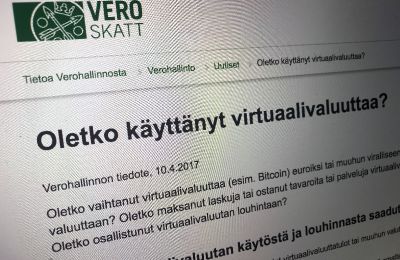 A vast majority of people who have made profits with cryptocurrency trading have not reported the wins to the tax authorities in the previous years. With the Bitcoin boom of late 2017 it is expected that Finns gained over ten times as much than in the previous year.

During 2017 the value of Bitcoin went from less than a thousand euros to around 15,000 euros. Since that the price has halved, but many finns managed to turn a profit from training Bitcoin or some other cryptocurrencies.

Capital gains made with cryptocurrency trading are taxed on the year they are traded for traditional currency like Euros or Dollars or real world goods. Profits are taxed as capital income, and the tax office in Finland has improved it's tracking of payments. The authorities are able to match money transfers and payments from anonymous Bitcoin-wallets.

All of the transaction data for Bitcoin and other cryptocurrencies are stored in a public ledger known as Blockchains. The tax office has been admitted generous access to bank transfers and other data, which enables identifying people. By matching the transfers it is evident that in the past most citizens have not reported profits made with virtual currencies.

Talking to Kauppalehti, a Finnish financial daily, inspector general Timo Puiro from the Finnish tax office states that they have identified over 3,300 finns that should pay tax for cryptocurrency trading. Taxes for 2017 should be filed latest by 15th of May, but for some the last date was set in April. Puiro says it is too early to calculate how much taxes were not paid.

The estimated gains by residents of Finland amounts to a hundred Million euros for 2017. Roughly 30 Million of this should be paid to the state in the form of capital tax. These numbers are ten times higher than they were in 2016.

Puiro hopes that citizens will report the taxes voluntarily. Those avoiding the taxes will need to pay them as back taxes, with possible raises. In addition if the sums are considerably high, unpaid cryptocurrency trading gains could be subject to criminal prosecution.