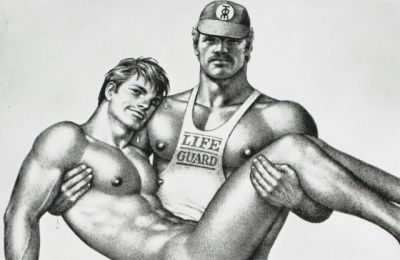 Touko Laaksonen, a Finnish artist known for his artist notable for his stylized homoerotic fetish art and his influence on late twentieth century gay culture. The artist was more prominently known through his pseoudonym Tom of Finland. His story is now available as a full lenght feature film.

The movie tells the life story of Touko Laaksonen, from humble bennings to international fame. In the movie he returns from the war, but life is tough for the young gay man. Homosexuality is still illegal, so he has to hide his relationship - but he finds release through art.

He starts drawing muscular male figures clad in black leather. Eventually the art takes him first to Berlin and then eventually to Los Angleles where his bold art gets the recognition it desers. Pieces signed by Tom of Finland become not only popular, but timeless and inspiring symbols in the fight for right of sexual minorities.

The movie is starred by Pekka Strang, Jessica Grabowsky and Lauri Tilkanen. The first official trailer is embedded below: