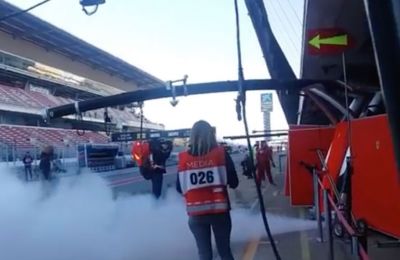 In the Barcelona testing event in 2018 the white smoke from the Ferrari cars, especially has attracted attention. What is this caused by?

The phenomenon is a cause of regulation change. In the season 2017 teams mixed oil to the petrol improve performance of cars. Now regulations ban this, so burning motor oil is now forbidden.

When a combustion engine runs, the crankcase fills up with oil smoke. Up until now a so-called breather valve has been used to channel the oil next to the intake manifold. So the oil smoke from the engine has been reburnt, and performance enhancing ingredients can no longer be added to the motor oil.

See an example of the oil smoke from the Ferrari 2018 car below:

« How much weight does the halo device add to Formula 1 cars? - Interview: Kimi Räikkönen self-critical before the 2018 Formula 1 season opening in Albert Park »